Though the months of May and June (depending on the country) are considered ALS awareness months, August may be even more famous for bringing the knowledge about this rare group of neurological diseases to the world. They say it began “with one name”: Pete Frates. A former Boston College baseball player, Frates was diagnosed with ALS  in 2012. On July 31 2014, he challenged some friends and celebrities (including NFL quarterbacks Tom Brady and Matt Ryan) to take the ice bucket challenge to “strike out ALS”. In August #icebucketchallenge videos flooded the Web, with more than 2.4 million videos, celebrities and all, circulating the Facebook.

I personally have been challenged even earlier, when in November 2012 Dr. Marina Bialik, the international coordinator for then new ALS Center Moscow, approached me in Fenway, Boston, and subtly asked: “Алиса, скажите, а как музыкальная терапия может помочь больным с БАС?” – i.e. Russian for: “Alisa, do you know of any applications of music therapy for ALS patients?” I was ashamed to say that I did not know much about ALS at all, and started researching. Next February I presented music therapy protocol to the multidisciplinary ALS team in Moscow, and that is how my ALS / MND journey started. 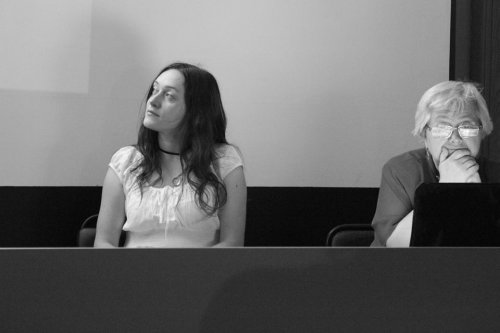 Marina Bialik and me, Moscow, 2014. Contemplating.

In August 2014, I observed the American #icebucketchallenge overexcitement with a feeling that can be described as cautious joy.  It was reassuring to see so many people, affected by ALS / MND personally, just compassionate enough or even inspired by sheer narcissism, to support the cause that by then had overtaken my professional interests.

As things tend to do in Russia, ALS ice bucket challenge took an unexpected turn there: pouring iced or lukewarm water on themselves, people collected money for everything from homeless puppies and cancer research to house upgrades and education – but not ALS! Normally I am too inhibited to engage in any activities of this sort, but this one stroke too close home.  And, with ALS TDI in close proximity, I had no excuse not to make a properly Russian #icebucketchallenge video myself. And, my, was it ice-cold! Yikes.

And good news are: it appears that, at least here in Massachusetts, we are going to continue circumfusing ourselves in ice cold water for the years to come: just yesterday Governor Charlie Baker joined former Boston College baseball star Pete Frates and his family on Friday for a ceremonial bill signing designating the first week of August in Massachusetts as the Ice Bucket Challenge Week.

I only wish more funds from all the fundraising were allocated to quality of life, patient care and rehabilitation research, in addition to biomedical lab studies. If you agree that today’s ALS / MND patient care is of no less importance than finding a cure one day, please kindly support my research on music therapy applications for improving speech, breathing and swallowing functions in people with ALS / MND. Any amount, one time or recurrent, donation brings hope – and it is fully tax deductible.